Delta on the Move Lecture Series
Sailing from Canton to Macao: A Map of the Waterways between the Two Cities

Delta on the Move Lecture Series
Sailing from Canton to Macao: A Map of the Waterways between the Two Cities 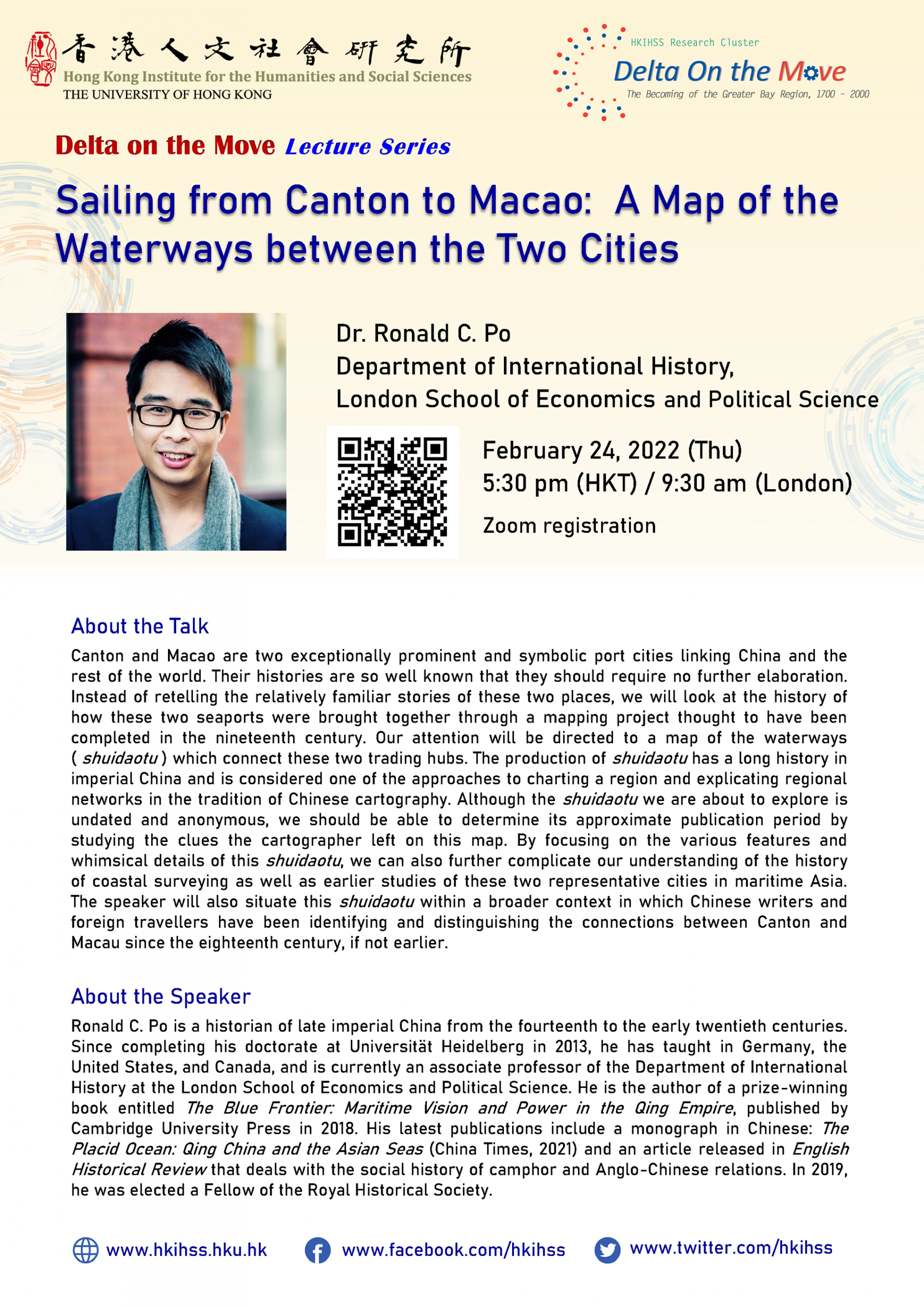 Canton and Macao are two exceptionally prominent and symbolic port cities linking China and the rest of the world. Their histories are so well known that they should require no further elaboration. Instead of retelling the relatively familiar stories of these two places, we will look at the history of how these two seaports were brought together through a mapping project thought to have been completed in the nineteenth century. Our attention will be directed to a map of the waterways (shuidaotu) which connect these two trading hubs. The production of shuidaotu has a long history in imperial China and is considered one of the approaches to charting a region and explicating regional networks in the tradition of Chinese cartography. Although the shuidaotu we are about to explore is undated and anonymous, we should be able to determine its approximate publication period by studying the clues the cartographer left on this map. By focusing on the various features and whimsical details of this shuidaotu, we can also further complicate our understanding of the history of coastal surveying as well as earlier studies of these two representative cities in maritime Asia. I will also situate this shuidaotu within a broader context in which Chinese writers and foreign travellers have been identifying and distinguishing the connections between Canton and Macau since the eighteenth century, if not earlier.

Ronald C. Po is a historian of late imperial China from the fourteenth to the early twentieth centuries. Since completing his doctorate at Universität Heidelberg in 2013, he has taught in Germany, the United States, and Canada, and is currently an associate professor of the Department of International History at the London School of Economics and Political Science. He is the author of a prize-winning book entitled The Blue Frontier: Maritime Vision and Power in the Qing Empire, published by Cambridge University Press in 2018. His latest publications include a monograph in Chinese: The Placid Ocean: Qing China and the Asian Seas (China Times, 2021) and an article released in English Historical Review that deals with the social history of camphor and Anglo-Chinese relations. In 2019, he was elected a Fellow of the Royal Historical Society.