The Development of Buddhist Charity in China: The Case Study of the Ren’ai Foundation in Beijing

The Development of Buddhist Charity in China: The Case Study of the Ren’ai Foundation in Beijing

This talk focuses on a recently established Buddhist charity in Beijing municipality. Using as a theoretical framework an approach inspired by Bourdieu on the different strategies used by the state for the accumulation of symbolic power, the paper argues that after the disaster of the usurpation strategy used during the Maoist period, the CCP has opted for a strategy of imitation in order to harness the resources of religious institutions in helping it implement aspects of its social policies. The mixed results obtained by strategies of innovation for the four decades after Mao, and the unequal relation of power between an omnipotent party-state and Buddhist institutions handicapped by a climate largely hostile to religion having precluded the idea of establishing a strategy of cooperation, the strategy of imitation implies creating ex-nihilo institutions that will reproduce an institutional behavior that the state approves. The success of this strategy, however, relies on pliant actors that accept to fulfill that role. The paper will make clear the limitations to this approach: the limited resources bestowed to religious institutions for their development of philanthropy prevents them from having a greater impact in the delivery of social services. The paper will be based on the Communist Party’s instructions to its cadres on religious work, research on Buddhist charity by Chinese scholars, and participant-observation in the summer of 2014 to the activities of a six year-old Buddhist philanthropy based in Beijing municipality. This talk will underline the obstacle that stand in the way of the party’s attempts to use resources from Buddhist institutions in the implementation of its policies.

André Laliberté (UBC 1999) is full professor at the School of Political Studies, University of Ottawa, where he teaches on the politics of China and comparative politics. His current research looks at how governments rely on religious resources to legitimize their social policies, and how they interact with religious institutions in the delivery of services, with a special focus paid to the emerging challenges of the work of care in Sinitic societies. He has co-edited with Bruce Berman and Rajeev Bhargava the book Secular States and Religious Diversity (UBC Press 2013), and has written The Politics of Buddhist Organizations in Taiwan (RoutledgeCurzon 2004).

This is an event organized by the “Rethinking Spirituality and Religion in Asia” Cluster of the Institute and co-sponsored by the Department of Sociology, The University of Hong Kong. 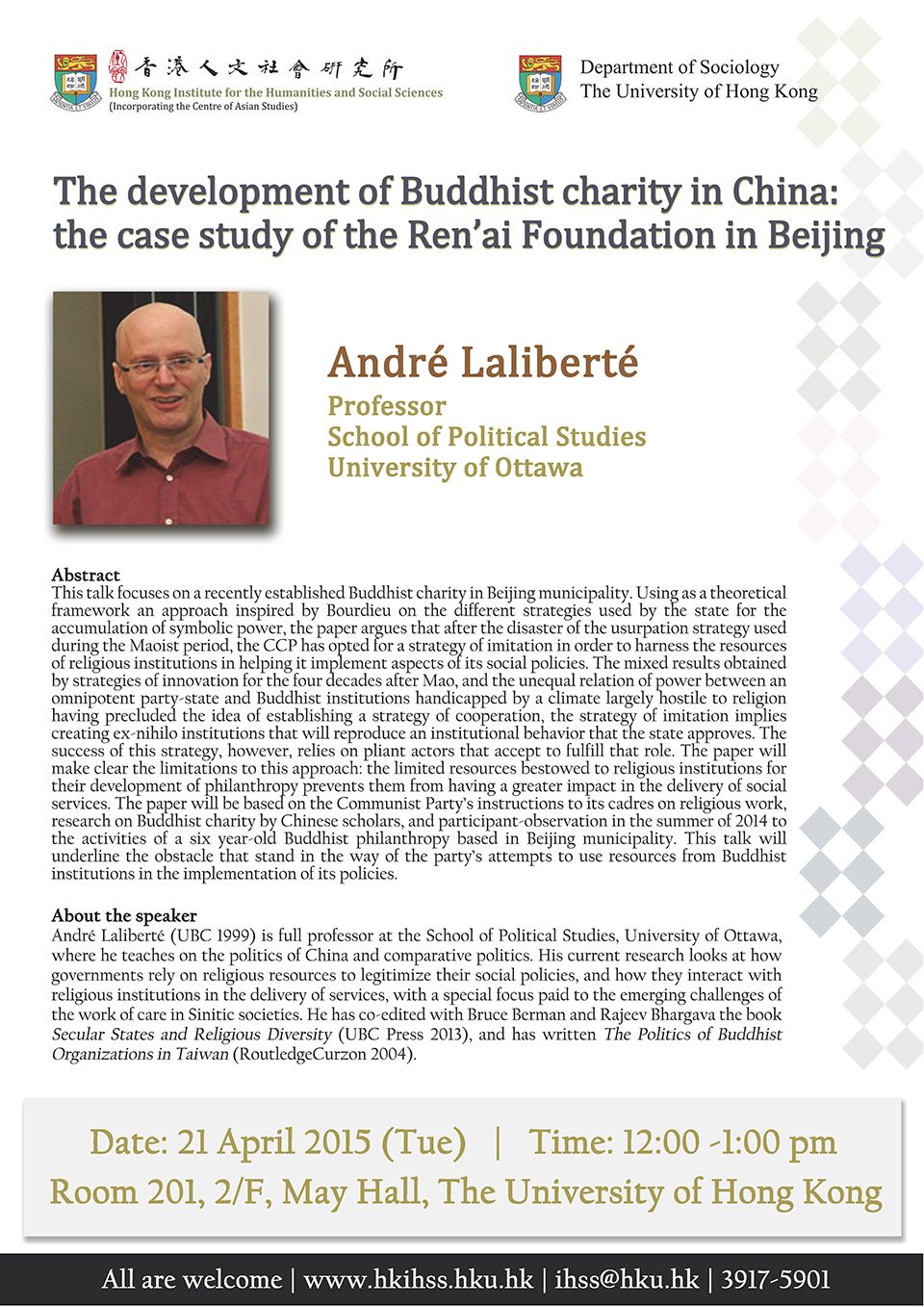