Interdisciplinary Lunchtime Seminar
The Daoist-Marxist Monk of Iraq: On the Life and Thought of Hadi al-‘Alawi

Interdisciplinary Lunchtime Seminar
The Daoist-Marxist Monk of Iraq: On the Life and Thought of Hadi al-‘Alawi 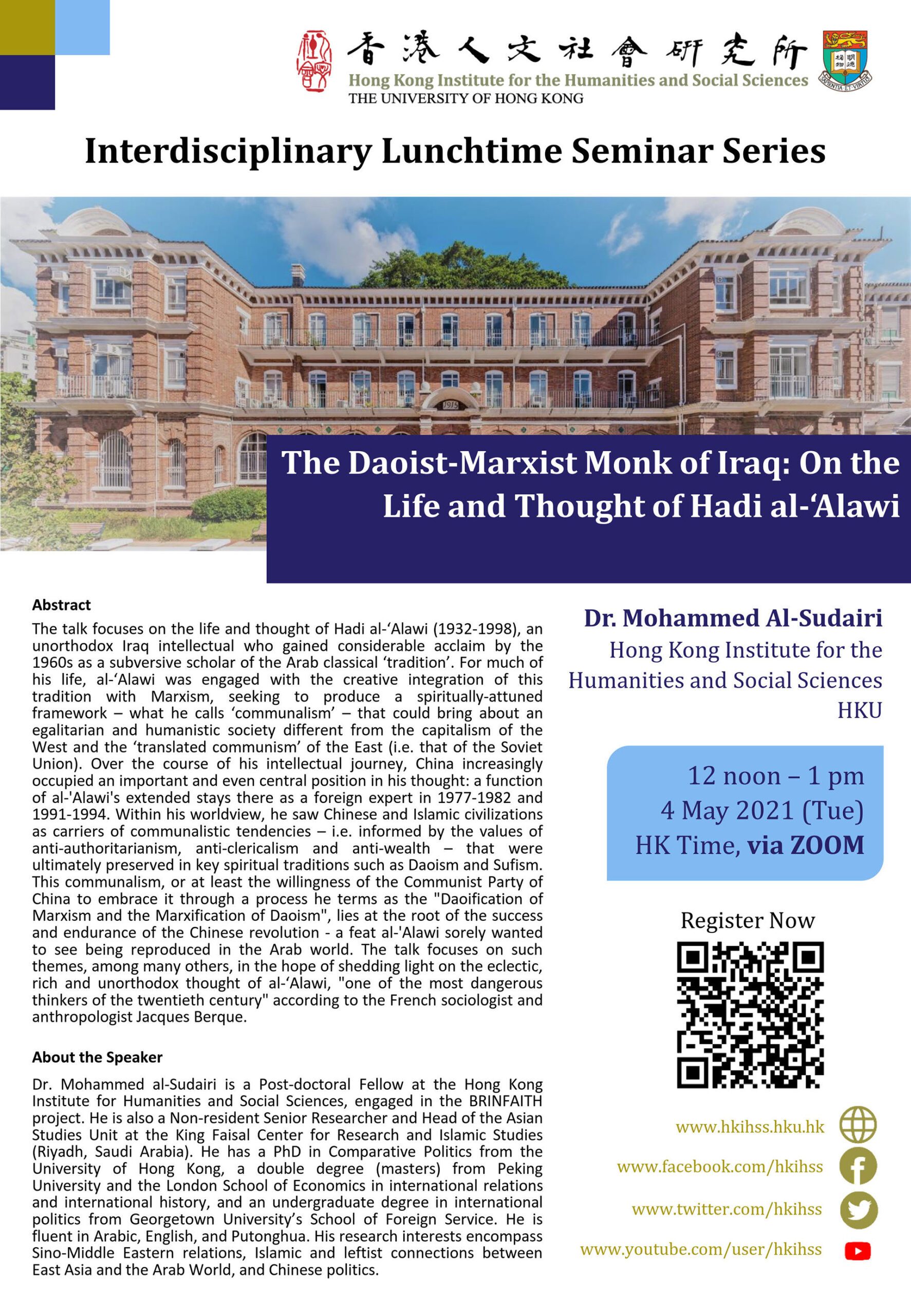 The talk focuses on the life and thought of Hadi al-‘Alawi (1932 – 1998), an unorthodox Iraq intellectual who gained considerable acclaim by the 1960s as a subversive scholar of the Arab classical ‘tradition’. For much of his life, al-‘Alawi was engaged with the creative integration of this tradition with Marxism, seeking to produce a spiritually-attuned framework what he calls ‘communalism’ — that could bring about an egalitarian and humanistic society different from the capitalism of the West and the ‘translated communism’ of the East (i.e. that of the Soviet Union). Over the course of his intellectual journey, China increasingly occupied an important and even central position in his thought: a function of al-‘Alawi's extended stays there as a foreign expert in 1977 – 1982 and 1991 – 1994. Within his worldview, he saw Chinese and Islamic civilizations as carriers of communalistic tendencies — i.e. informed by the values of anti-authoritarianism, anti-clericalism and anti-wealth — that were ultimately preserved in key spiritual traditions such as Daoism and Sufism. This communalism, or at least the willingness of the Communist Party of China to embrace it through a process he terms as the “Daoification of Marxism and the Marxification of Daoism”, lies at the root of the success and endurance of the Chinese revolution —​ a feat al-‘Alawi sorely wanted to see being reproduced in the Arab world. The talk focuses on such themes, among many others, in the hope of shedding light on the eclectic, rich and unorthodox thought of al-‘Alawi, “one of the most dangerous thinkers of the twentieth century” according to the French sociologist and anthropologist Jacques Berque.

Dr. Mohammed al-Sudairi is a Post-doctoral Fellow at the Hong Kong Institute for Humanities and Social Sciences, engaged in the BRINFAITH project. He is also a Non-resident Senior Researcher and Head of the Asian Studies Unit at the King Faisal Center for Research and Islamic Studies (Riyadh, Saudi Arabia). He has a PhD in Comparative Politics from the University of Hong Kong, a double degree (masters) from Peking University and the London School of Economics in international relations and international history, and an undergraduate degree in international politics from Georgetown University’s School of Foreign Service. He is fluent in Arabic, English, and Putonghua. His research interests encompass Sino-Middle Eastern relations, Islamic and leftist connections between East Asia and the Arab World, and Chinese politics.