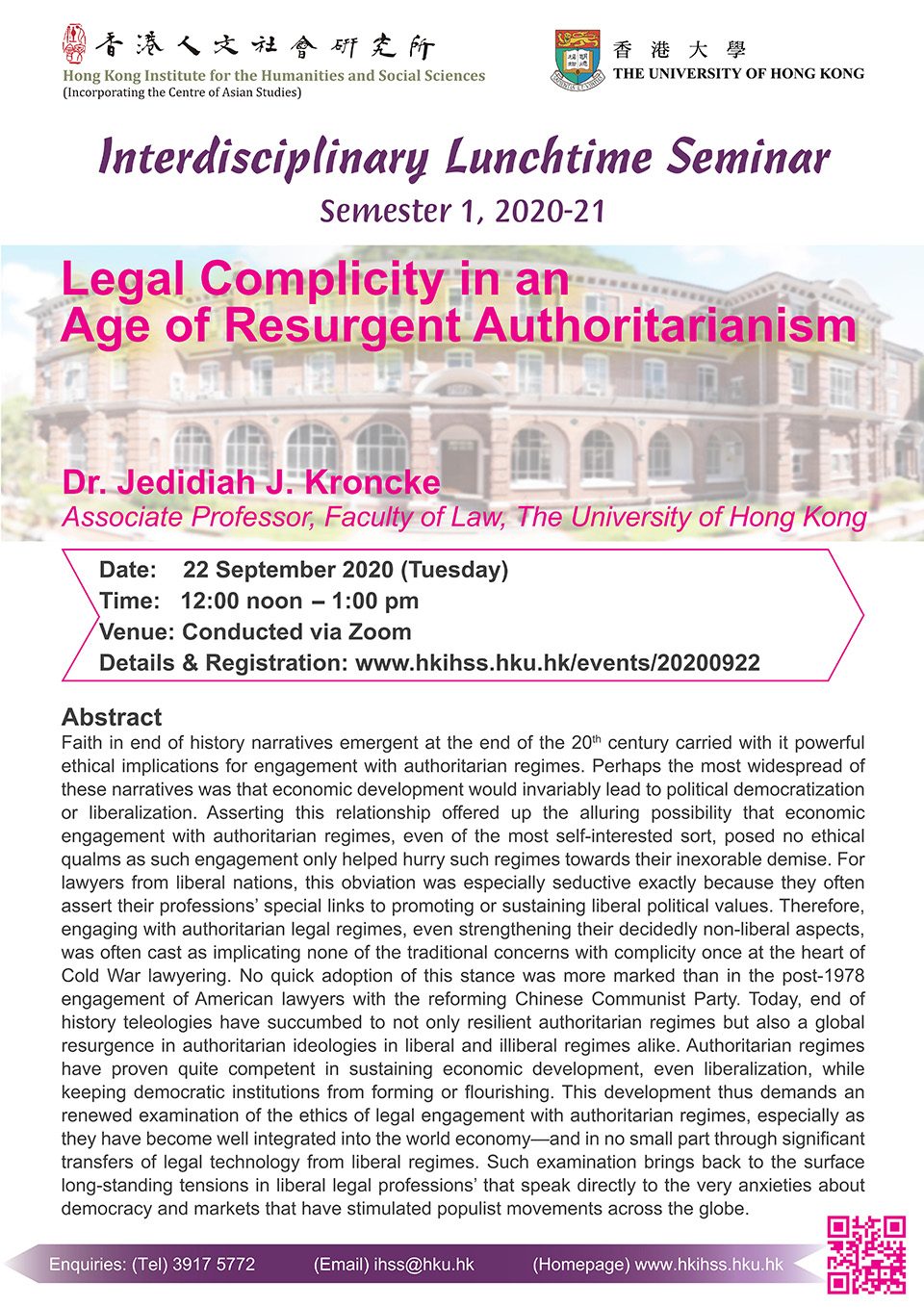 Faith in end of history narratives emergent at the end of the 20th century carried with it powerful ethical implications for engagement with authoritarian regimes. Perhaps the most widespread of these narratives was that economic development would invariably lead to political democratization or liberalization. Asserting this relationship offered up the alluring possibility that economic engagement with authoritarian regimes, even of the most self-interested sort, posed no ethical qualms as such engagement only helped hurry such regimes towards their inexorable demise. For lawyers from liberal nations this obviation was especially seductive exactly because they often assert their professions’ special links to promoting or sustaining democratic values. Therefore, engaging with authoritarian legal regimes, even strengthening their decidedly non-liberal aspects, was often cast as implicating none of the traditional concerns with complicity once at the heart of Cold War lawyering. No quick adoption of this stance was more marked than in the post-1978 engagement of American lawyers with the reforming Chinese Communist Party. Today, end of history teleologies have succumbed to not only resilient authoritarian regimes but also a global resurgence in authoritarian ideologies in liberal and illiberal regimes alike. Authoritarians have proven quite competent in sustaining economic development, even liberalization, while keeping democratic institutions from forming or flourishing. This development thus demands an renewed examination of the ethics of legal engagement with authoritarian regimes, especially as they have become thoroughly integrated into the world economy—and in no small part through significant transfers of legal technology from liberal nations. Such examination brings back to the surface long-standing tensions about the nature of lawyering that speak directly to the very anxieties about democracy and markets that have stimulated populist movements across the globe.

Dr. Jedidiah Kroncke is an Associate Professor of Law at the University of Hong Kong. Previously, he was a Professor at FGV Sao Paulo School of Law, and before this he was the Senior Fellow at the East Asian Legal Studies Program at Harvard Law School. Dr. Kroncke earned a B.A. in Asian Studies and Legal Studies from the University of California Berkeley, a J.D. from Yale Law School, and a Ph.D. in Social and Cultural Anthropology also from the University of California, Berkeley. After graduate school, he was awarded the Oscar M. Ruebhausen Fellowship at Yale Law School, the Samuel I. Golieb Fellowship in Legal History at NYU Law and the Berger-Howe Fellowship in Legal History at Harvard Law School.  His first book, The Futility of Law and Development: China and the Dangers of Exporting American Law (Oxford University Press), explores the role of U.S.-China relations in the formation of modern American legal internationalism.​

Copyright © 2020 Hong Kong Institute for the Humanities and Social Sciences, The University of Hong Kong. All Rights Reserved.