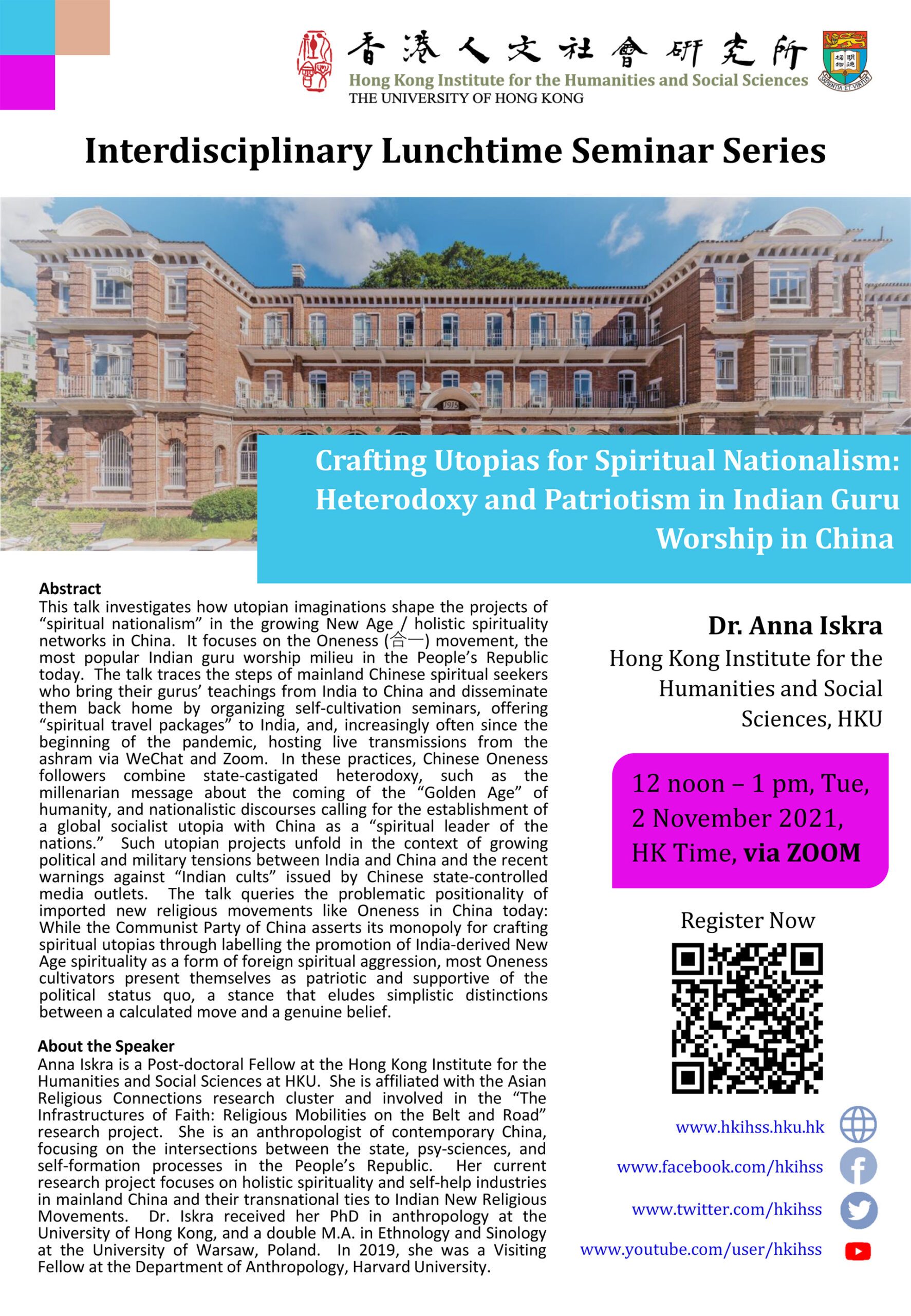 This talk investigates how utopian imaginations shape the projects of “spiritual nationalism” in the growing New Age / holistic spirituality networks in China.  It focuses on the Oneness (合一) movement, the most popular Indian guru worship milieu in the People’s Republic today.  The talk traces the steps of mainland Chinese spiritual seekers who bring their gurus’ teachings from India to China and disseminate them back home by organizing self-cultivation seminars, offering “spiritual travel packages” to India, and, increasingly often since the beginning of the pandemic, hosting live transmissions from the ashram via WeChat and Zoom.  In these practices, Chinese Oneness followers combine state-castigated heterodoxy, such as the millenarian message about the coming of the “Golden Age” of humanity, and nationalistic discourses calling for the establishment of a global socialist utopia with China as a “spiritual leader of the nations.”  Such utopian projects unfold in the context of growing political and military tensions between India and China and the recent warnings against “Indian cults” issued by Chinese state-controlled media outlets.  The talk queries the problematic positionality of imported new religious movements like Oneness in China today:  While the Communist Party of China asserts its monopoly for crafting spiritual utopias through labelling the promotion of India-derived New Age spirituality as a form of foreign spiritual aggression, most Oneness cultivators present themselves as patriotic and supportive of the political status quo, a stance that eludes simplistic distinctions between a calculated move and a genuine belief.

Anna Iskra is a Post-doctoral Fellow at the Hong Kong Institute for the Humanities and Social Sciences at HKU.  She is affiliated with the Asian Religious Connections research cluster and involved in the “The Infrastructures of Faith: Religious Mobilities on the Belt and Road” research project.  She is an anthropologist of contemporary China, focusing on the intersections between the state, psy-sciences, and self-formation processes in the People’s Republic.  Her current research project focuses on holistic spirituality and self-help industries in mainland China and their transnational ties to Indian New Religious Movements.  Dr. Iskra received her PhD in anthropology at the University of Hong Kong, and a double M.A. in Ethnology and Sinology at the University of Warsaw, Poland.  In 2019, she was a Visiting Fellow at the Department of Anthropology, Harvard University.