In Pine Mansion, the “public good” (gongyi) is invoked to refer to everything economic, social and religious which is undertaken for the common good of its inhabitants. As a result of the transformations that have occurred in this former emigrant village following the making of Shenzhen, Pine Mansioners today proudly emphasize the end of the long-standing relationship of dependence toward their overseas relatives and their newfound self-reliance in financing public goods.

Yet no so long ago, large amounts of diasporic contributions have played an instrumental role in the resistance opposed by the people of Pine Mansion to governmental decisions whi­ch directly threatened two of their most important historical institutions. In this talk Dr. Trémon focuses on the collective mobilization whereby Pine Mansioners self-funded and built a new school. The local government has been able to tap into the funding provided by Pine Mansion’s diaspora, and exploit the villagers’ emotional ties to the school, as well as their sense of face.

Dr. Trémon analyses how Pine Mansioners consider themselves to be simultaneously acting like the state and in conformity to its demands, and she offers the notion of tributary social reproduction as an alternative to analyses in terms of modes of production and (neoliberal) governmentality. The triangle formed by the diaspora, the local community and the state is framed by a tributary relationship, in which the local community played the intermediary while maintaining its ideal of autonomy in providing for its public good.

Dr. Anne-Christine Trémon is Senior Lecturer in Anthropology at the University of Lausanne. She holds a Ph.D. in Social Anthropology from the École des hautes études en sciences sociales in Paris (EHESS).

Her research examines Chinese globalization and the Chinese diaspora in an anthropological and historical perspective. She has conducted fieldwork among the Chinese in French Polynesia for her doctoral thesis (2000-2005), has worked on heritage and museums in Taiwan (2005-2008), the World Expo in Shanghai in 2010, Chinese migrants and urban policies in Paris (2010-2011) and on Shenzhen since 2011.

This is an event organized by the “Hubs, Mobilities and the Asian Urban” Cluster. 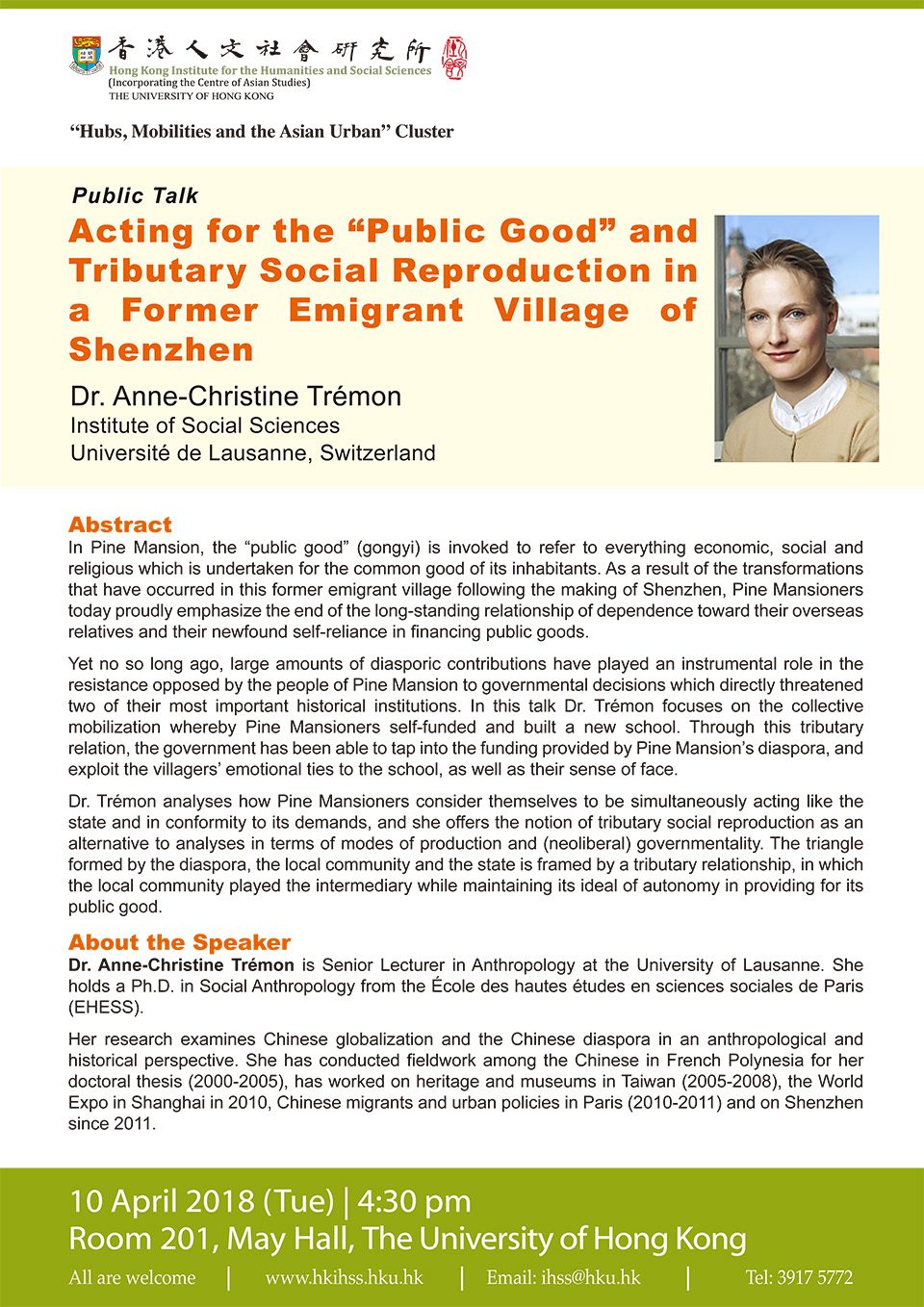