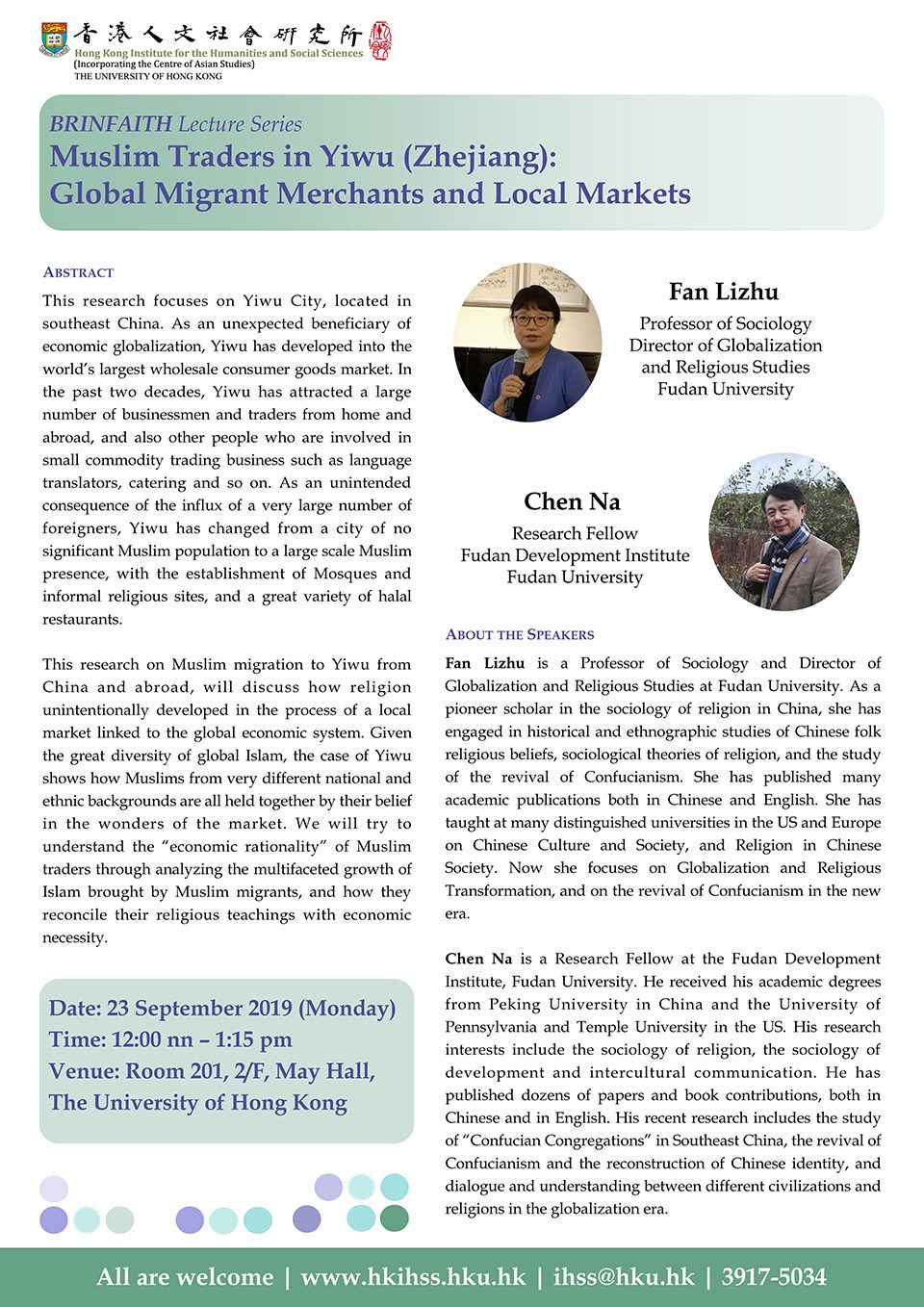 This research focuses on Yiwu City, located in southeast China. As an unexpected beneficiary of economic globalization, Yiwu has developed into the world’s largest wholesale consumer goods market. In the past two decades, Yiwu has attracted a large number of businessmen and traders from home and abroad, and also other people who are involved in small commodity trading business such as language translators, catering and so on. As an unintended consequence of the influx of a very large number of foreigners, Yiwu has changed from a city of no significant Muslim population to a large scale Muslim presence, with the establishment of Mosques and informal religious sites, and a great variety of halal restaurants.

This research on Muslim migration to Yiwu from China and abroad, will discuss how religion unintentionally developed in the process of a local market linked to the global economic system. Given the great diversity of global Islam, the case of Yiwu shows how Muslims from very different national and ethnic backgrounds are all held together by their belief in the wonders of the market. We will try to understand the “economic rationality” of Muslim traders through analyzing the multifaceted growth of Islam brought by Muslim migrants, and how they reconcile their religious teachings with economic necessity.

Fan Lizhu is a Professor of Sociology and Director of Globalization and Religious Studies at Fudan University. As a pioneer scholar in the sociology of religion in China, she has engaged in historical and ethnographic studies of Chinese folk religious beliefs, sociological theories of religion, and the study of the revival of Confucianism. She has published many academic publications both in Chinese and English. She has taught at many distinguished universities in the US and Europe on Chinese Culture and Society, and Religion in Chinese Society. Now she focuses on Globalization and Religious Transformation, and on the revival of Confucianism in the new era.

Chen Na is a Research Fellow at the Fudan Development Institute, Fudan University. He received his academic degrees from Peking University in China and the University of Pennsylvania and Temple University in the US. His research interests include the sociology of religion, the sociology of development and intercultural communication. He has published dozens of papers and book contributions, both in Chinese and in English. His recent research includes the study of “Confucian Congregations” in Southeast China, the revival of Confucianism and the reconstruction of Chinese identity, and dialogue and understanding between different civilizations and religions in the globalization era.

This is an event organized by the CRF Project “Infrastructures of Faith: Religious Mobility on the Belt and Road” (RGC CRF HKU C7052-18G).