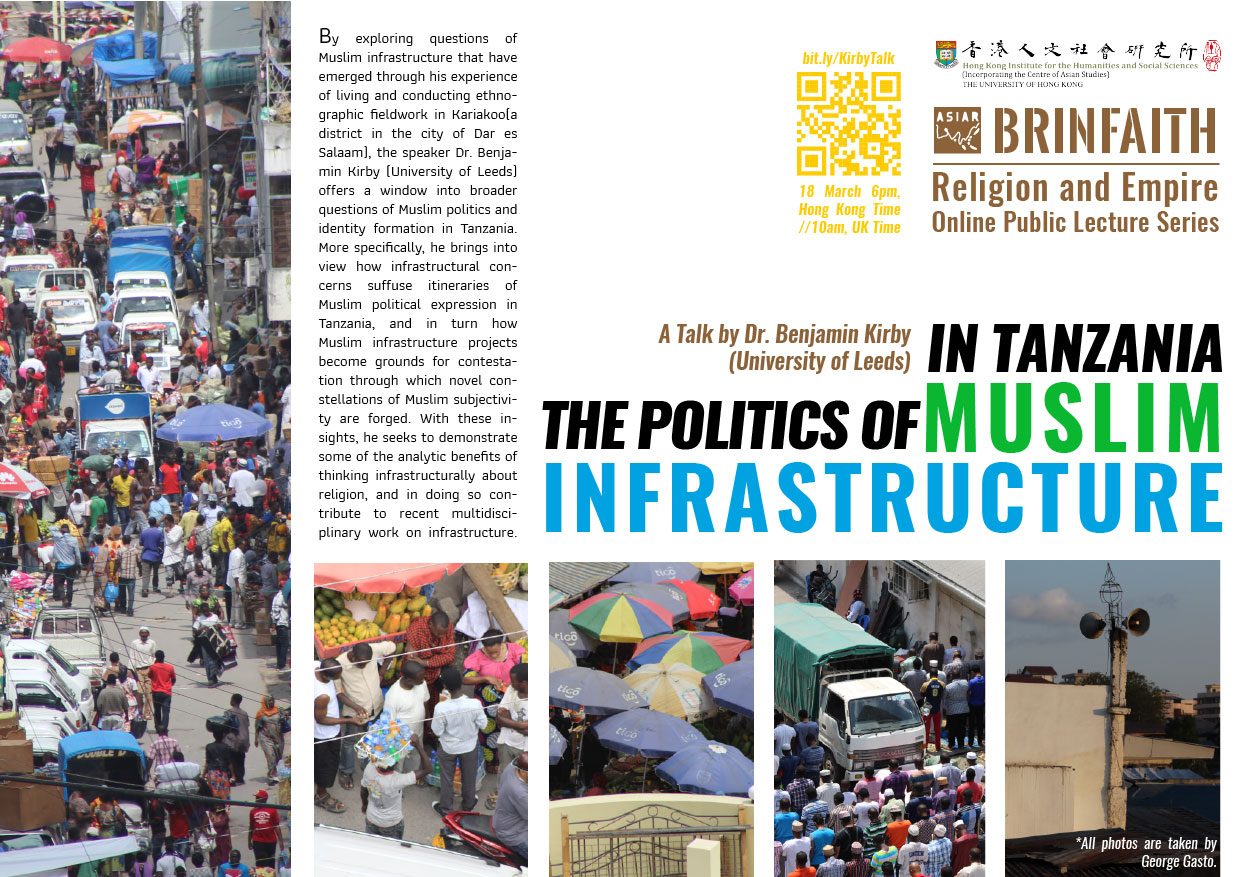 Kariakoo is an old residential area in the city of Dar es Salaam in Tanzania. In recent decades, it has transformed into a super-dense commercial district. Droves of people converge in its streets every day to trade goods which go on to be circulated across the city and the wider East African region. While Kariakoo is a religiously mixed setting, it features a pronounced concentration of Muslim social practices and material forms. In recent years, a number of the district’s large mosques have acted as rallying points for protests against social injustice.

In this lecture, I explore questions of Muslim infrastructure that have emerged through my experience of living and conducting ethnographic fieldwork in Kariakoo. My analysis centres on two different modalities of Muslim infrastructure. The first is a set of informal arrangements devised by residents in Kariakoo through which Muslim practices and material forms are configured as infrastructure for the district. I examine how these arrangements magnify the capacity of residents to secure livelihoods and articulate claims. The second is an apparatus of facilities and services dispersed across Tanzania that is configured by a centralised institution as a national infrastructure for Muslims. I explore contestations in Kariakoo surrounding the governance of this apparatus and the unfulfilled promises of welfare and social mobility that it indexes.

My analysis of how these projects are devised and disputed in Kariakoo offers a window into broader questions of Muslim politics and identity formation in Tanzania. More specifically, I bring into view how infrastructural concerns suffuse itineraries of Muslim political expression in Tanzania, and in turn how Muslim infrastructure projects become grounds for contestation through which novel constellations of Muslim subjectivity are forged. With these insights, I seek to demonstrate some of the analytic benefits of thinking infrastructurally about religion, and in doing so contribute to recent multidisciplinary work on infrastructure.

Benjamin Kirby is a British Academy Postdoctoral Research Fellow at the University of Leeds where he is affiliated with the Centre for Religion and Public Life (CRPL) and the Leeds University Centre for African Studies (LUCAS). Ben’s research explores questions of religious politics and urban mutuality from the vantage point of rapidly-growing cities in the African continent. His work is positioned at the interface of religious studies, African studies, and urban studies. As part of his postdoctoral project funded by the British Academy, Ben is currently finalising a monograph on the politics of Muslim infrastructure in Dar es Salaam, while developing a more comparative angle on these issues through multi-sited fieldwork in Durban and Kampala. Alongside Dr Yanti Hoelzchen, he is also coordinating a research project entitled “Conceptualising Religious Infrastructure” which is funded by DFG Programme Point Sud and the Frobenius Institute. This project brings together an international and interdisciplinary team of researchers to extend the analytic potential of religious infrastructure as a term for studying social entanglements. The first collection of publications — a thematic issue for a leading religious studies journal — will appear in 2022.