(To be rescheduled) Interdisciplinary Lunchtime Seminar

Interdisciplinary Lunchtime Seminar
“Those who can, create; those who can’t, philosophize”: Tragedy and the Philosophy of the Tragic

Interdisciplinary Lunchtime Seminar
“Those who can, create; those who can’t, philosophize”: Tragedy and the Philosophy of the Tragic 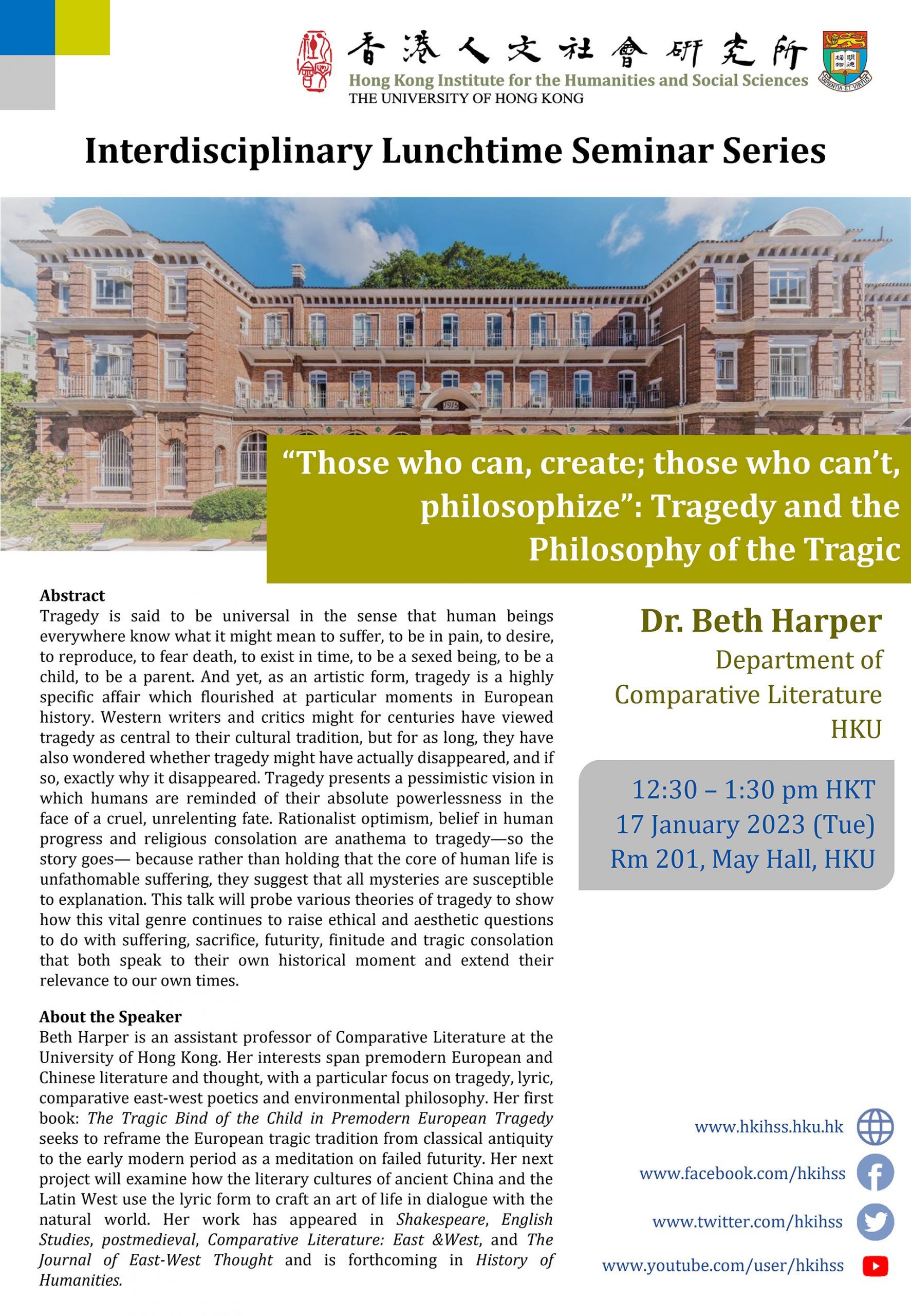 Tragedy is said to be universal in the sense that human beings everywhere know what it might mean to suffer, to be in pain, to desire, to reproduce, to fear death, to exist in time, to be a sexed being, to be a child, to be a parent. And yet, as an artistic form, tragedy is a highly specific affair which flourished at particular moments in European history. Western writers and critics might for centuries have viewed tragedy as central to their cultural tradition, but for as long, they have also wondered whether tragedy might have actually disappeared, and if so, exactly why it disappeared. Tragedy presents a pessimistic vision in which humans are reminded of their absolute powerlessness in the face of a cruel, unrelenting fate. Rationalist optimism, belief in human progress and religious consolation are anathema to tragedy — so the story goes — because rather than holding that the core of human life is unfathomable suffering, they suggest that all mysteries are susceptible to explanation. This talk will probe various theories of tragedy to show how this vital genre continues to raise ethical and aesthetic questions to do with suffering, sacrifice, futurity, finitude and tragic consolation that both speak to their own historical moment and extend their relevance to our own times.

Beth Harper is an assistant professor of Comparative Literature at the University of Hong Kong. Her interests span premodern European and Chinese literature and thought, with a particular focus on tragedy, lyric, comparative east-west poetics and environmental philosophy. Her first book: The Tragic Bind of the Child in Premodern European Tragedy seeks to reframe the European tragic tradition from classical antiquity to the early modern period as a meditation on failed futurity. Her next project will examine how the literary cultures of ancient China and the Latin West use the lyric form to craft an art of life in dialogue with the natural world. Her work has appeared in Shakespeare, English Studies, postmedieval, Comparative Literature: East &West, and The Journal of East-West Thought and is forthcoming in History of Humanities.