Dr. Laura Meek
(Assistant Professor, Centre for the Humanities and Medicine, The University of Hong Kong)

Dr. Laura Meek
(Assistant Professor, Centre for the Humanities and Medicine, The University of Hong Kong)

Dr. Laura Meek (Assistant Professor, Centre for the Humanities and Medicine, The University of Hong Kong) 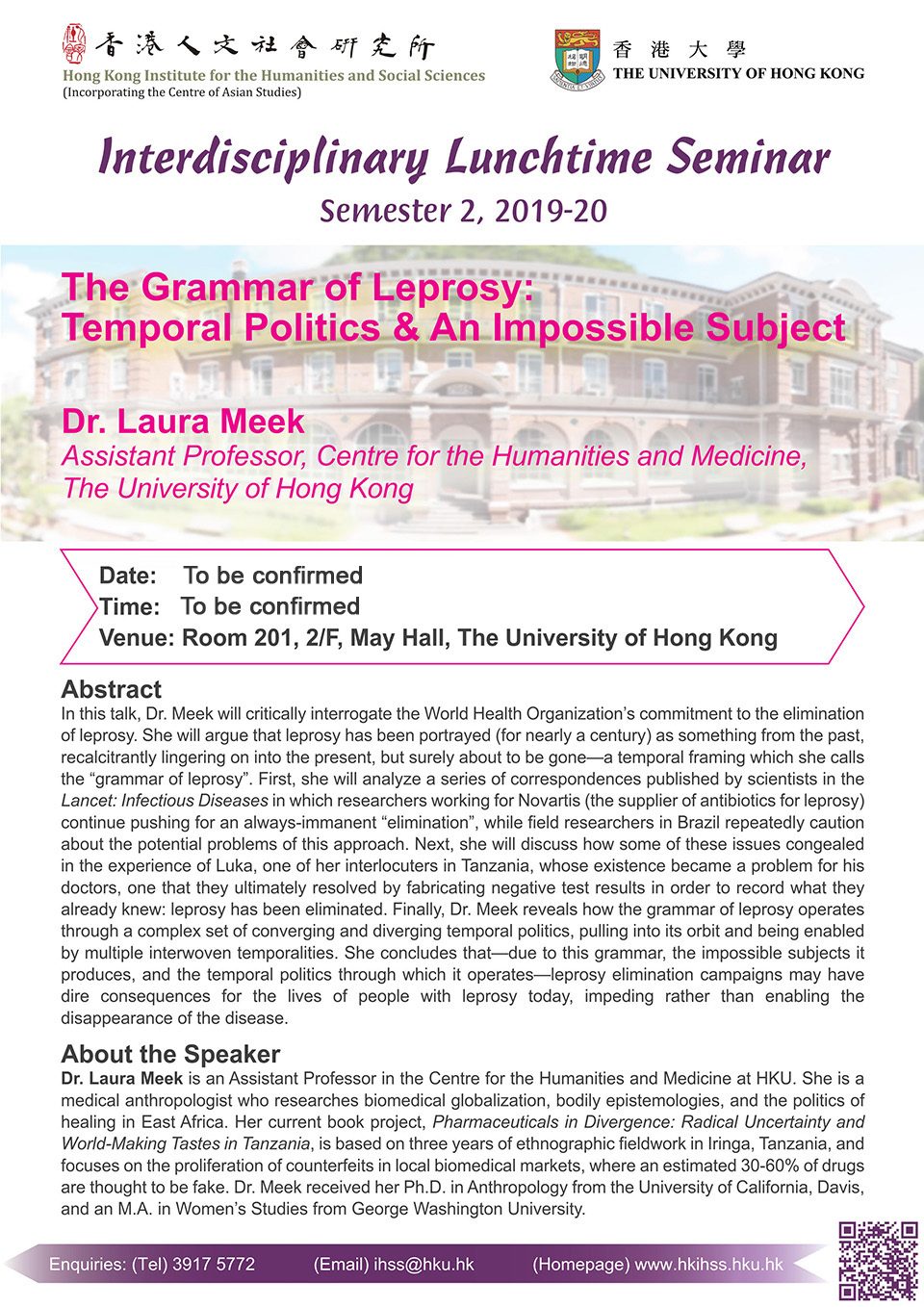 Dr. Laura Meek (Assistant Professor, Centre for the Humanities and Medicine, The University of Hong Kong)

In this talk, Dr. Meek will critically interrogate the World Health Organization’s commitment to the elimination of leprosy. She will argue that leprosy has been portrayed (for nearly a century) as something from the past, recalcitrantly lingering on into the present, but surely about to be gone—a temporal framing which she calls the “grammar of leprosy”. First, she will analyze a series of correspondences published by scientists in the Lancet: Infectious Diseases in which researchers working for Novartis (the supplier of antibiotics for leprosy) continue pushing for an always-immanent “elimination”, while field researchers in Brazil repeatedly caution about the potential problems of this approach. Next, she will discuss how some of these issues congealed in the experience of Luka, one of her interlocuters in Tanzania, whose existence became a problem for his doctors, one that they ultimately resolved by fabricating negative test results in order to record what they already knew: leprosy has been eliminated. Finally, Dr. Meek reveals how the grammar of leprosy operates through a complex set of converging and diverging temporal politics, pulling into its orbit and being enabled by multiple interwoven temporalities. She concludes that—due to this grammar, the impossible subjects it produces, and the temporal politics through which it operates—leprosy elimination campaigns may have dire consequences for the lives of people with leprosy today, impeding rather than enabling the disappearance of the disease.

Dr. Laura Meek is an Assistant Professor in the Centre for the Humanities and Medicine at HKU. She is a medical anthropologist who researches biomedical globalization, bodily epistemologies, and the politics of healing in East Africa. Her current book project, Pharmaceuticals in Divergence: Radical Uncertainty and World-Making Tastes in Tanzania, is based on three years of ethnographic fieldwork in Iringa, Tanzania, and focuses on the proliferation of counterfeits in local biomedical markets, where an estimated 30-60% of drugs are thought to be fake. Dr. Meek received her Ph.D. in Anthropology from the University of California, Davis, and an M.A. in Women’s Studies from George Washington University.