Interdisciplinary Lunchtime Seminar (TO BE RESCHEDULED)
Astroturfing in Hong Kong and Beyond: Patterns of Coordination in Hidden Twitter Campaigns

Interdisciplinary Lunchtime Seminar (TO BE RESCHEDULED)
Astroturfing in Hong Kong and Beyond: Patterns of Coordination in Hidden Twitter Campaigns 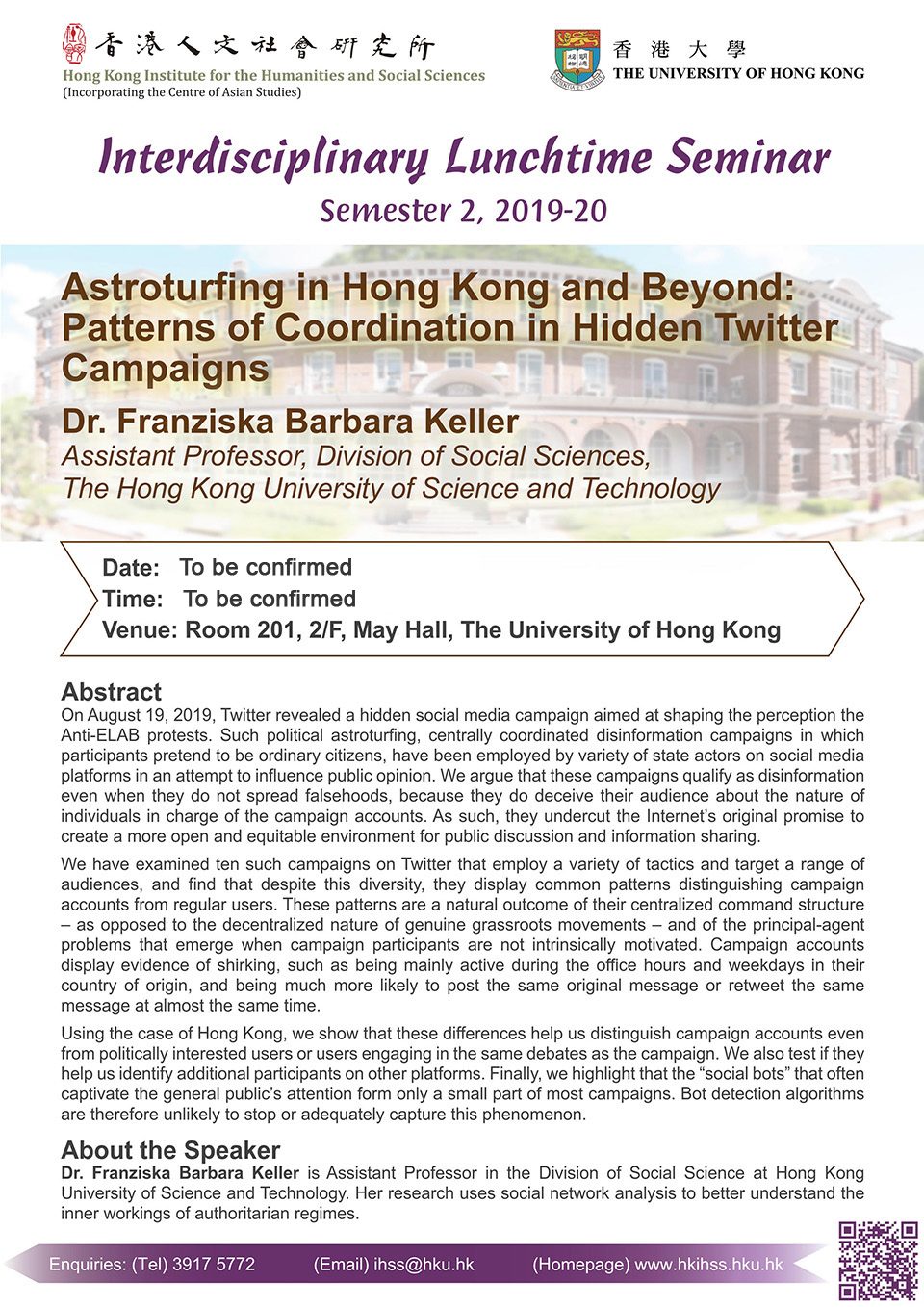 On August 19, 2019, Twitter revealed a hidden social media campaign aimed at shaping the perception the Anti-ELAB protests. Such political astroturfing, centrally coordinated disinformation campaigns in which participants pretend to be ordinary citizens, have been employed by variety of state actors on social media platforms in an attempt to influence public opinion. We argue that these campaigns qualify as disinformation even when they do not spread falsehoods, because they do deceive their audience about the nature of individuals in charge of the campaign accounts. As such, they undercut the Internet’s original promise to create a more open and equitable environment for public discussion and information sharing.

We have examined ten such campaigns on Twitter that employ a variety of tactics and target a range of audiences, and find that despite this diversity, they display common patterns distinguishing campaign accounts from regular users. These patterns are a natural outcome of their centralized command structure – as opposed to the decentralized nature of genuine grassroots movements – and of the principal-agent problems that emerge when campaign participants are not intrinsically motivated. Campaign accounts display evidence of shirking, such as being mainly active during the office hours and weekdays in their country of origin, and being much more likely to post the same original message or retweet the same message at almost the same time.

Using the case of Hong Kong, we show that these differences help us distinguish campaign accounts even from politically interested users or users engaging in the same debates as the campaign. We also test if they help us identify additional participants on other platforms. Finally, we highlight that the “social bots” that often captivate the general public’s attention form only a small part of most campaigns. Bot detection algorithms are therefore unlikely to stop or adequately capture this phenomenon.

Dr. Franziska Barbara Keller is Assistant Professor in the Division of Social Science at Hong Kong University of Science and Technology. Her research uses social network analysis to better understand the inner workings of authoritarian regimes.